The RegionManager provides a way to load and unload smaller regions of a world as they move into and out of the camera’s view. This enables the Wattage Tile Engine to work with very large worlds which would not fit into memory if loaded in their entirety.

Using the Wattage Tile Engine without the RegionManager

Many applications do not require very large worlds. In these cases, applications are able to load complete environments into memory without issue. In this use case, the developer would typically perform the following tasks:

This approach works for the majority of cases. However, what if your app needs to display a very large world which is too big to fit into RAM? Or how about the case where the world is procedurally generated and absolutely huge? Enter the RegionManager.

Using the Wattage Tile Engine with the RegionManager

There is an issue with using the TileLayer as a buffer in this way, and that issue is the issue of coordinate spaces. To interact with this layer as though it were very large (much bigger that it actually is), it becomes necessary to adjust camera and entity world positions into layer local positions. This can get very confusing and is not something the developer should have to concern themselves with. For this reason, the RegionManager has been created to handle all of this behind the scenes. This requires the developer to interact with the camera and entities through the interface exposed by the RegionManager instead of directly with the camera and entities.

Before going further, let’s review some terminology. Refer to the diagram below: 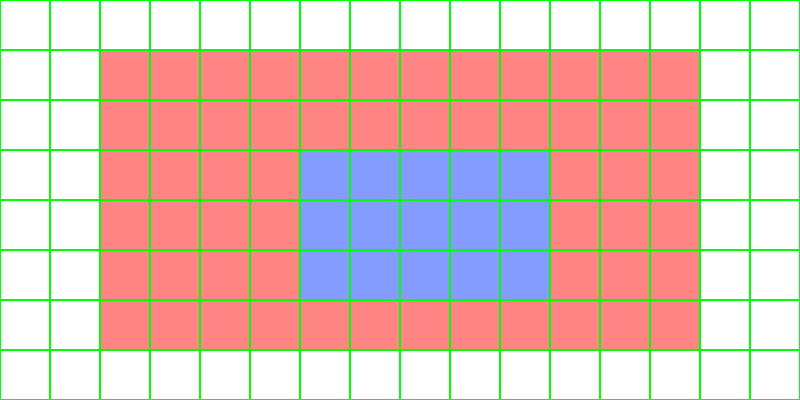 The dimensions of all of these regions are configured when creating the RegionManager and must meet the following validations:

Tasks performed by the developer when using the RegionManager are the following:

The RegionManager requires the developer to supply a listener which has references to two functions:

getRegion(params) is supplied with a table containing the following:

The implementation of getRegion() may return an empty table in the case of an empty region. However, if the region is to contain tiles, the returned table must contain a nested table called tilesByLayerIndex which contains 2-dimensional 1-based arrays of tile values indexed by the index of the layer they are to be inserted into. The values in these 2-dimensional arrays must be resolvable by the SpriteResolver supplied to the engine.

The developer may also attach anything else to the table that may be useful for cleanup. This same table will be passed to the regionReleased() function when the region is no longer needed. This is a handy way to track and release static physics objects in the region.

The following example implements the getRegion() listener function to return a region with a block in the center of it for every other row and column. It also attaches the physics object created for it so it can be released later.

regionReleased(regionData) is supplied with the same regionData table which was provided by getRegion(). The implementation should clean up anything that getRegion() allocated and attached to the regionData table. This is a handy way to track and release static physics objects in the region. If nothing additional was allocated in the getRegion() function, then this function need not do anything.

Using the RegionManager, it is possible to position the camera and entities using world coordinates. The RegionManager will handle all of the conversions for you.

…or for non-resource entities, do the following:

…or for non-resource entities, do the following: